Market overview and look ahead to Autumn 2019

Gemma Clarke from Cope Seeds and Grain has put pen to paper, to share her expertise on market trends…

Harvest 2018 proved to be another interesting year. With a fairly mild winter, the opportunity for winter drilling went on and on, hampering the spring season. Despite lower stock levels of spring oats and spring beans in particular due to poor germinations caused by the previous hot summer, the so called lack of spring seed supply never transpired…

Looking back at last Autumn the number 1 variety yet again was Skyfall taking 9.4% of the market, closely followed by South West favourite Graham at 8.7%. This is followed by hard feed variety KWS Kerrin and top yielding hard variety RGT Gravity. Siskin’s market share has fallen but still remains the 5th most popular variety, followed by breadmaking variety KWS Zyatt and consistent feed variety Costello. Gleam by Syngenta has increased its market share from 0.1% to 5%, probably on the back of a strong Septoria score of 6.4 and high untreated yield of 85% as growers take more interested in untreated yields. KWS Barrel’s market share remains fairly static coming in 9th place, followed by group 3 Elicit which has seen its market share rise from 0.2% to 4%.

Going forward and looking at Autumn 2019, the variety on everyone’s lips is group 2 variety KWS Extase. A French bred variety, KWS Extase although a group 2, does have a buy back into flour miller Heygates with an attractive premium. KWS Extase offers the highest septoria resistance score of any variety on the recommended list at 8.1 which plays a big part in its exceptional untreated yield of 95% of control, the highest untreated yield of any recommended variety. Unfortunately KWS Extase is now already sold out for this year and due to the variety taking the imagination of many other countries within the EU and being classed as a pan European variety there is no supply of seed for us to import as they are also sold out.

The group 1 sector is likely to be dominated by Skyfall, followed by KWS Zyatt and Crusoe for those growers with specific homes for the variety. Newcomer to the group 3s, KWS Firefly may take the interest of some growers due to it being the highest yielding group 3 treated and untreated with a strong 7 for Septoria resistance, the 3rd best rating for Septoria behind Extase and Sundance. In terms of the soft group 4s, LG Skyscraper was released early last year and already has some traction. As the highest yielding variety across all regions we predict its market share will continue to rise and be of interest to growers this year. LG Spotlight is a new variety in this category with yields just behind LG Skycraper but with better Specific weight and HFN. LG Spotlight also yields particularly well in the West and produces plenty of straw. The hard group 4 will see Graham, Kerrin, Gravity and Gleam take the most interest. Graham is sure to be the most popular but we predict Gleams market share could continue to increase due to its higher untreated yield and Septoria resistance over Gravity and Kerrin.

Last Autumn saw KWS Orwell take the majority market share rising from 12% in 2017 to 25% in Autumn 2018. 2 nd largest variety was Syngenta Hybrid Bazooka followed by long time favourite KWS Tower, which has seen a decline in its market share from 16% down to 11%. KWS Cassia continues to hold around 11% of the market share, while KWS Glacier has dropped from 10% down to 3%.

Going forward to this Autumn, there are 4 new 2 row feed varieties that have been added onto the Recommended List which all seem to offer something for different regions. Leading the charge with the top yield is KWS Gimlet. While Gimlet is recommended for the whole of the UK it is particularly useful in the East where it scores 106% of control treated paired with a pretty good 84% untreated. Next up is LG Mountain which may take some interest in the North where it yields 105% of control, the highest yield of any 2 row feed in the North and shows early maturity which is important in this region. Next is LG Flynn which looks particularly useful in the West showing the highest yield in that area out of the 2 row feed varieties. As well as good yields in the West LG Flynn also offers the highest specific weight and lowest screenings of the 4 top yielding varieties.

The market continues to be dominated by Mascani and although superseded in yield by 6%, the variety still takes 64% market share. It is likely that until we find an oat with Mascani’s quality that we will see any change in the varieties dominance as quality proves king to yield. Interestingly the winter oat market continues to increase and the area entered for seed is at a 5 year high which mirrors the increase in seed sales during Autumn 2018. This increase is most likely on the back of oats continuing to play a bigger role in the health food sector including oat ‘milk’. We predict the winter oat area will continue to grow this Autumn on the back of increased markets for oats as well as growers trying to find alternative break crops to Oilseed Rape.

As with Oats, the rye market also continues to grow. Perhaps with the continued threat of drought, growers are looking towards more tolerant species such as Rye and Triticale which can also be grown with less chemical input. There also seems to be an increased interest from the animal feed sector, especially for pig feed rations where rye can help the overall wellbeing of the pig.

There is also work being undertaken to prove the ability of rye to decrease the harmful emissions found in pig slurry. The leading Rye variety is Helltop, a Hybrid variety represented by Agrii which like the other leading Hybrids is useful for Biomass into the AD plants. SU Mephisto follows on which is represented by Frontier for the Ryvita market. Humbolt and Protector follow suit as conventional population types (non hybrids) which are useful forage varieties.

For reasons similar to Rye, the Triticale market has increased as interest is being shown by growers with light, drought prone lands where Triticale with its deep rooting system can tap into moisture and nutrient reserves. Triticale is also useful for smothering weeds as this picture from untreated trials in Lincolnshire proves. For those growers wishing to grow triticale and trade away the crop, if it achieves a minimum 72kg/hl specific weight, it can trade at only a £5-£10 discount to feed wheat. 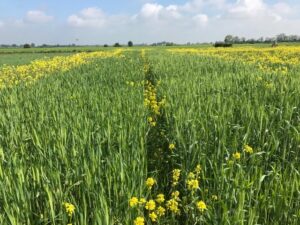 The most popular variety certified in Autumn 2018 was KWS Fido followed by top yielding variety Kasyno. However going forward in terms of areas entered Securo winter Triticale is showing a large increase with the potential to take over 20% of the market. Securo triticale offers the highest protein content of any of the listed varieties as well as the 2nd tallest straw, providing high straw yields. Securo is successfully grown both conventionally and organically and is a particularly clean variety, perfect for the livestock farmer.

Last season was particularly difficult for both winter and spring beans and whilst the area entered for beans in 2017 increased from the year before, the poor season meant a lack of supply of bean seed for Autumn 2018 with only 2,971t of winter beans certified, down 42%. Going forward Tundra will continue to be the dominant variety with potential to take 68% of the market followed by old timer Wizard with the potential to do 18% of the market. With issues surrounding the growing of Oilseed Rape, will we see an increased uptake in Winter Beans this season as farmers continue to look for alternative break crops? This is one to keep an eye on.