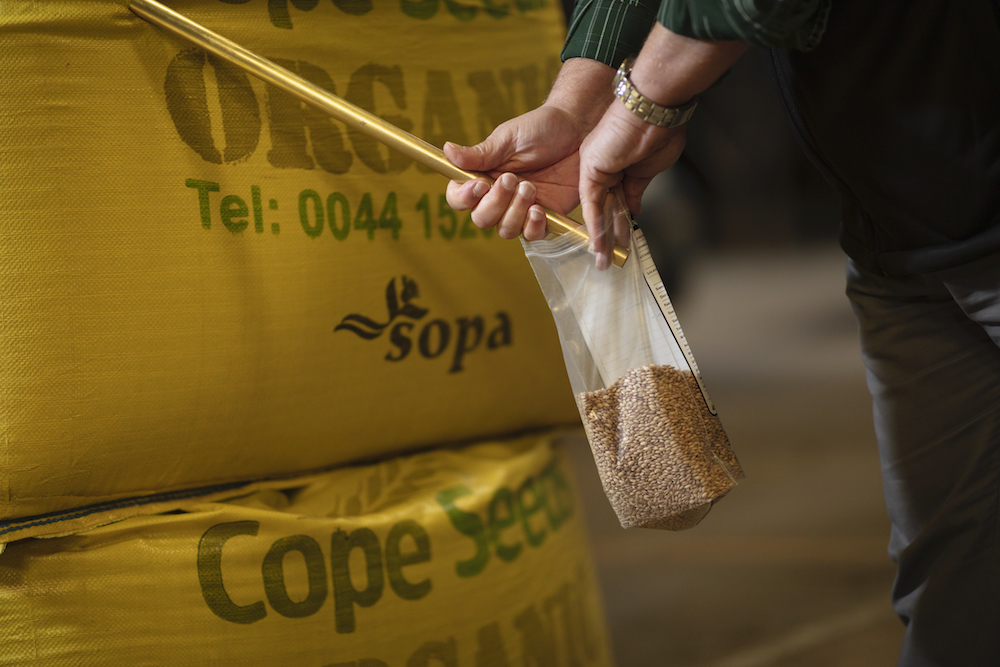 Gemma Clarke gives insight into this season’s seed market, where the number of sales are similar to last year, but there is a difference in some species, including a 21% lift in autumn and spring oats…

“It has been an unprecedented autumn and spring season, which will lead to an interesting harvest, to say the least. We hope that by providing insight into our seed sales, it may help you market your grain more effectively.

Our sales figures for organic seed are very similar to last year, but we can see a marked difference in a few of the major species.”

Feed Wheat
Surprisingly, feed wheat is up on tonnage despite the difficult Autumn. Whether other seed houses saw the same trend, I am unsure, but with some winter crops looking quite poor across the country, yields are likely to be low.

However, with large volumes of imported wheat already in the country and available to come in from this harvest, unless end-users start setting targets for domestic wheat usage in the ration, organic feed wheat prices will continue to be dictated by imported prices and a large supply.

Oats
Combining our autumn and spring oats, we have seen a huge 21% increase in domestic oat seed sales. Year on year we are seeing an increase in the amount of domestic organic oats being used by the millers and we applaud their efforts at building and growing this market. I assume the price differential of conventional and organic milling oats are easier for certain socio-economic groups to swallow and therefore play a large part in a buyer’s organic basics (butter, milk, porridge).

Barley
We thought a lot more area would be drilled to barley this season but as a company we have seen a 34% decrease in domestic barley seed sales. Unfortunately, we did experience a couple of large seed losses due to the germination of the seed deteriorating in the heap when it came to processing in the new year. We have never experienced these types of losses, where the seed was dry and germination was 98-99% at harvest but dropped to 50-70% by January.  We can attribute this to the mild, wet autumn causing the seed to catch moisture and lose germination.

It demonstrates the importance of grain management and conditioning large heaps, especially those destined for premium markets. We had to cancel some orders and turn away future enquiries. Taking this into account I predict our potential sales would have been similar to the previous year. Therefore, I envisage the amount of barley being drilled this season is no more than in normal seasons.

However, I would stress the importance of Brexit and the continued expansion of organics across the continent. More countries are becoming self-sufficient and the ability for us to export as easily may make certain premium markets more difficult to attain.

However, while the sterling is weak, this could prove beneficial between harvest and December 31 and we would strongly advise that early options are considered.

Beans
Love them or hate them, beans will be the crop of the season in terms of prices. Already we are seeing a shortage in beans and would like to take this opportunity to request that if you still have beans to trade from this season, please get in touch. In terms of seed sales, it’s very similar to the previous two seasons.

We have worked hard on the variety Victus and look forward to working with growers who signed up to our £30 premium over feed bean price this harvest.

In terms of new crop beans, we predict high demand as concerns arise around the availability of soya from countries such as India and China who have at the time of writing, closed their borders for exports.

There are two schools of thought here… one the borders will reopen in a few weeks and all will be resolved, or second, feed homes will resort to imported peas from Eastern Europe. However, I would question the amount of peas available and as such see the demand the domestic beans to remain strong, especially for those feed manufacturers who appreciate domestic protein.

I hope this piece has been helpful to you and should you be interested to talk about new crops, please get in touch.

Stay safe and we look forward to speaking to you soon!